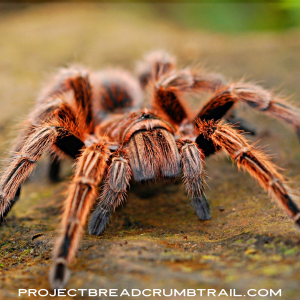 Since today is Halloween, I thought it would be appropriate to share something I believe most people are afraid of. It’s something scarier than any bump in the night, ghosts, ghouls, vampires or zombies!

I would say DISCOMFORT takes the number one spot.

I hate to think we are becoming weaker as a society, but I can’t help notice the intolerance many people have to the slightest discomfort or inconvenience.

As a personal trainer, I learned that people don’t like to work out because they don’t like being sore. Many clients were resistant to trying something because it felt uncomfortable. Even more so, people didn’t want to look or feel stupid. They were afraid of this before they even tried an exercise. Feeling stupid is a fear of failure, which I would agree is not a comfortable feeling. I’d also say it’s a close second to discomfort when it comes to things humans are scared of.

Dan Crenshaw says it best in his book Fortitude. He says that it’s good to do something hard so that the next time you experience something tough in life, you’ll be better at getting through it or overcoming the problem. Doing hard things when you don’t have to, makes doing hard things easier when you have to do them. From my own experience, I can say this is true!

During quarantine my husband and I would work out at a local high school track. We would lug our dumbbells and weight vest and jump ropes and everything we had, which wasn’t much, to work out. One day it was my husband’s brilliant idea to do a half mile (2 trips around the track) of walking lunges. I knew it would be hard but I gave it a try. I did not make the two laps. I made it one lap and promised myself I’d do two next time, now that I know how terrible it feels.

So a month or so went by and I tried it again. This time I finished the two loops, but about 1.5 loops in I thought I was going to die. It was a hot day and I felt like I was boiling under the bright Texas sun. My legs felt like jello and to be honest, it just hurt. I thought to myself “This is stupid, whats the point? I’m not going to get a medal for doing this. There’s no point to being in this much pain right now.”

My face must have said it all because my husband asked “What’s wrong?” I gave him the death look (remember, this was his idea) and loudly proclaimed “This is Hard!” He raised his eyebrows and responded by letting me know that I was just doing lunges, and to get over it and finish. It’s amazing how one can go from wanting to kill someone to being so thankful they made you finish. There’s a sense of pride that comes with accomplishing something hard, and the pride trumps the discomfort. The feeling of pride and memory of your accomplishment will last forever, but the discomfort will not.

I’ve felt that sense of accomplishment several times but admit it can be hard to stay positive in the moment. That’s where mental toughness (often paired with physical toughness) comes into play.

Yesterday was the 9 year anniversary of when I ran the Marine Corps Marathon in DC. It was the biggest athletic challenge I’d taken on at that point and I’ll tell you, it was hard. Do you know what made it easier? Being surrounded by active duty Marines who were running the race in full combat gear, carrying American Flags that waived high behind them. Looking around at the other participants, many in their camouflage, who had prosthetic limbs. There was even a small handful of WWII Vets, who were accompanied by a Marine on each side of them, that shuffled along, barley able to pick their feet up off the ground. They kept going because that race was nothing compared to the unimaginable events they experienced out of selflessness for us, for our nation and for our freedom. 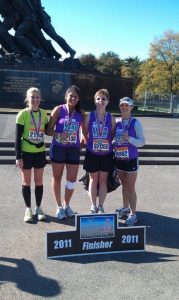 A couple weeks after that race I was at work when I got the news that the format of our year end evals were changing, and would require a lot more work than a more automatic method we had used previously. I had 25 direct reports at the time,  which meant I had to complete 25 evals. I remember thinking, well, if I can run 26 miles then I can write 25 evals. That will be a cake walk in comparison!

When I was studying to be a personal trainer I learned about something called time under tension. It’s a training method that puts your muscles under tension for longer periods of time. Think of a bicep curl. Instead of just doing the curl, lifting the weight up and down at the same pace, you would count down, 4 – 3 – 2 – 1  when you were lowering the weight, thus making it take longer to work through that range of motion. It makes it harder and forces more control. It’s uncomfortable, but it’s one of the best methods to build strength.

Time under tension is a form of stress on our bodies. There is a mental stress and toughness that goes along with accomplishing something physically challenging. We have to think positive and be kind to ourselves, and when that feels impossible and we’re failing at doing that, we just have to grin and bear it. Sometimes that’s the only way. I think most will agree, including myself, that the most challenging and stressful times in our lives are the ones that made us the most strong. Our time under tension may be slow and painful, but we shouldn’t be afraid of the discomfort. Instead, we should embrace it.

Do something hard and uncomfortable. It’s good for you. When I’m in the moment, I tell myself that pain is weakness leaving the body and that pain is temporary but victory is forever. I remind myself that I’ve grown the most outside of my comfort zone, and that with God, all things are possible.