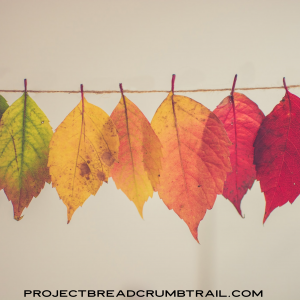 For many, Fall is a favorite season. The brilliance and beauty of the foliage is breathtaking and the cool crisp air is a sweet reprieve from the hot summer months.

There are hundreds of quotes about this season, but the one I love most is “Fall teaches us the beauty in letting things go.”

As a reforming control freak, this resonates with me. I’ll admit it, I like things to be a certain way and I obviously think my ways are the best. (Don’t we all?)

Someone once called me Monica Geller. I had no clue who she was or what this meant because I never hopped on the Friends train. (Gasp! I know!) Fifteen years after the show ended, I finally viewed a couple of episodes. I watched her obsessive cleanliness and compulsory organizational habits and I thought, she’s my people! (By the way, she is also considered kind, caring and friendly!)

I can relate to liking nice neat piles of anything stackable and I am utterly unsettled when things are out of place. It’s a blessing and a curse.  A blessing in a work environment especially being self employed and needing to have my ducks in a row. A curse when I drive myself insane (and probably others too) trying to make everything I touch perfect. I’m embarrassed to admit that one time I had a moderate panic attack when someone viewed my LinkedIn Profile before I had the chance to update one single sentence. I’m still convinced that’s why I didn’t get the job. Kidding, not kidding.

It’s always been hard for me to let these personality characteristics go, or at least loosen the reigns in an effort to prevent myself from going mad. (Is a single spoon in the sink really going to unravel my world?)

You can imagine how obsessed I became when I was deeply emerged in spiritual practices that included the ability to manifest anything I wanted just by controlling my thoughts. This started with the Secret, the Law of Attraction, and then the Power of Positive Thinking. I remember one of the gurus from these practices giving the following example of “mirroring.” Mirroring means the thoughts or words we put out into the universe, will be returned back to our physical life.

Sounds simple enough, but it was a bit more complex and required more specificity than I originally thought.

Here is an example. If you say, “I want to be debt free” the continual desire of WANTING to be debt free, is what will manifest from that. Therefore, you’re stuck in the same spot. The best practice for manifesting was to instead spin it in a positive and authoritative statement, already assuming ownership of the desired outcome. In that case, that same desire should be thought and spoke as, “I am debt free” or “I am financial freedom.”  You also have to believe these mantras, which isn’t easy when you’re in the hole and wondering how you’re going to pay rent.

I was confident I could master this but being the control freak that I am, I tormented myself with the task of constantly thinking in this format. When something didn’t go the way I wanted it to, I instantly blamed it on the way I thought about it. I became stressed out when my thoughts would race and I feared what the outcome would be.

As I’ve previously posted, I’ve traveled down several different paths of spirituality. Most of them all had the same underlying concept that we controlled our destiny. While this appeared to be very exciting, it was also a big responsibility and a lot of head banging against the wall when my desires didn’t manifest.

While I still see value in thinking positively, I found a different path to take.

Here Are My Three Reasons Why Choosing God Over Any Other Spiritual Practice is The Best Path To Take.

Just as the trees let their leaves go each year, we can let go of all of our concerns and outcomes. It was a lot of weight on my shoulders when I obsessed over controlling every single matter in my life. When I surrendered my cares to Jesus (which is what He wants us to do), that weight was instantly removed. We don’t do the work, He does. All we have to do is believe in Him and communicate with Him. All the pressure I put on myself, I gave to God. He always has a plan before we have a problem.

Have you ever not known what you really wanted? Maybe you knew that where you currently were in life was not where you wanted to be, but you didn’t know what needed to be done to restart. That’s OK because you don’t have to have the right words or ideas of what to do. Sometimes we have a destination in mind, but can’t find the breadcrumbs to pick up to get there. Often, I’m not sure how to pray for things, but that doesn’t matter because God knows the desires of our hearts. He knows what we want to ask for even when we don’t know ourselves. What a relief it was knowing that it didn’t matter if I was thinking or asking in the wrong format, possibly doing more damage than good!

It’s a beautiful thought to know that God controls our destiny and always has our best interest in mind. If we have a death grip on the things we think we want, and don’t let God lead us to the things He knows are best for us, we are short changing ourselves.

I’ve heard and used to believe the universe loves us and wants to give us the things we want. So when it doesn’t, does that mean the love isn’t there? With God, that question is eliminated. Whether or not we receive the desires we ask for, we can be confident that either outcome is out of love for us. Remember, what we think we want and what God knows is best for us are often different.

Please don’t confuse what I’m saying with lack of personal responsibility. We don’t get to sit back and just watch the show. God is not our errand boy. We have to act as well. I’m suggesting that the action we take should be with God’s guidance.

I know there are people reading this saying, “as the Captain in my sea of life, I’ve done pretty well on my own and I haven’t relied on God.”

Sure. This is possible. It was for me, too.

Here’s the difference between navigating life on our own with a trendy “spiritual” belief, vs with God as our guide. On our own we hit the bullseye, but it’s often on the wrong target. It’s like finishing a road race with your best personal record, but not realizing you had much more gas in the tank to go even faster.

As we make our way into the Fall season, our daylight, times and clocks will fall back. We however, will fall forward, if we chose to be like the trees that let their leaves go, and surrender ourselves to God. We can’t avoid the falls we take in life, but we can choose the direction in which we fall. This season, let’s fall forward.