Two weeks ago I had the privilege of meeting a 98 year old woman who was on hospice. One week ago she gently took her last breath and passed away. Though I only knew Francine for a couple of hours, I loved her. She was a dear friend of one of my neighbors. They had met at church several years ago and became an integral part of each other’s lives. When Francine became weak from a stroke and her health started declining, my neighbor cleared out a room and moved her in.

Francine loved visitors and I love old folks so it was a treat for both of us to spend a little time together. As she told me about her life, her jobs, her husband, her kids and her upbringing, she’d often cut herself off to say “the Lord has been good to me” or “God has been good to me.” Her entire body seemed to melt right in front of my eyes when these words repeatedly fell from her lips.

This wasn’t the first time I’d heard someone say the Lord has been good to them and I’m sure it won’t be the last. But, I did come to a realization that hadn’t occurred to me before.

God was good to Francine because she opened the door for Him and acknowledged his goodness.

Often, the phrase “the Lord has been good to me” can make it seem like some sort of luck is involved, as if God is good to some but not to others. The phrase can sound like you have to pick the winning lottery numbers in order to win God’s love and graciousness.

One lesson I’ve learned in my Jesus journey is probably the most two-folded lesson I’ve ever learned:

I’m not that special in the sense that God doesn’t favor me over anyone else, even those who are evil doers in the world. He loves the sinner, but hates the sin. He loves each of us equally. God’s love is an eternal constant.

I am special and worthy because of that love. By recognizing and acknowledging Him and by opening my mind, my heart and soul, I am able to gratefully receive  His gifts of goodness.

Regardless of how much God loves us, we have to open up, listen up and wake up to His presence in our lives, in order to receive His gifts and goodness.

A lot of people go through their whole life without recognizing anything, so acknowledging is impossible. In Francine’s case, her door was open to His goodness.

God knocked on my door for a loooooong time after I had slammed it in His face. When I finally cracked the door open and let a little of His Light shine in, mercy, grace and goodness followed. I had to be the one to do it though. I had to turn the knob and pull open the door.

I’m not sure if Francine had to open a door to let God in because it seemed she had never shut Him out to begin with.

She was brought up by people of faith and grew into a woman of faith herself. All I know is that the frail, oxygen assisted, dying woman I met, became full of peace when she spoke those words and reflected back on her life’s blessings.

Are there blessings you are blocking behind a closed door?

Do you hear a knock?

I have no doubt the doors of Heaven will be opened for Francine, the same way she opened the door of her heart to Him. 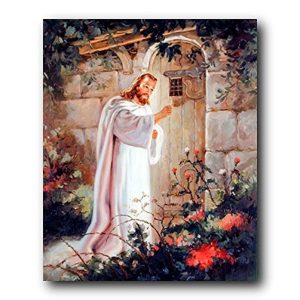 The Breadcrumb Trail is my personal, patriotic and prayer-filled journey. Thanks for following.

Good bless our country and everyone reading.