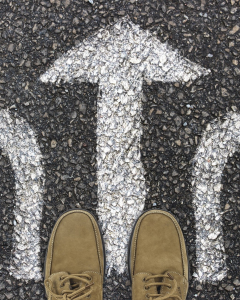 As most people can relate to, I’ve had many complicated relationships throughout my life, and my relationship with God was not exempt from this. In today’s terminology one could say that our relationship was an open one, at least on my part. God was always there, but I would frequently explore other avenues of spirituality.

This started with the Secret, the Law of Attraction, and the Power of Positive Thinking. Then I sprinkled in some Universal Oneness and Radical Forgiveness. I read a lot of Deepak Chopra, and Eckhart Tolle. I saged my apartments and balanced my chakras. I rounded out my journey as a student of A Course in Miracles.

Though I always believed in God as my Creator, I was very confused about Him and never invested the time to read His word. Above all, I was most confused about free will.

I wondered, why would God give everyone free will if He hates evil? If He wants everyone to love Him and obey Him, why didn’t He just create us to do so? If He had, we would never have known otherwise, right? If He is all knowing and has pre-knowledge of all the events in all of the lives within the world, He would see how shattered His perfect world would become. So, why bother?

In 2016 I started attending a non-denominational Christian church. It had a modern vibe to it and the Pastor was highly relatable. I looked forward to attending service each week and began reading the Bible.

Fast forward to the present moment, where for the last seven months I have considered it to be my full time job to learn and understand God’s word and strengthen my personal relationship with Jesus. That was piece I always heard about, but felt was missing.

Every day, for months before I moved from Upstate New York to Texas, I prayed that God would surround me with the people and places that I would learn and grow the best with. Then off I went on my one-way flight!

Within my first ten days in Texas I received what I call a God wink. The apartment we secured before moving turned out to be a huge flop, and we moved in just to have to move right out a week later. It was a stressful time but we ended up in a very nice complex that we still love today.

“God Bless You” were the first words I spoke to my downstairs neighbor, as I peered over my balcony one day after hearing a sneeze from down below.

What were the chances that God placed me right smack dab on top of a seventy-eight year old couple who dedicated their life to teaching the word of God all over the world? 100%

What were the chances they’d invest hours of their week, studying with me every day, working through my one million questions and helping me find the way, the truth, and the life? 100%

God had winked at me, and placed me exactly where I asked to be.

Circling back to the topic of free will, here is how I have come to understand God’s gracious gift to us.

God gave us free will because He loves us and wants to have a personal relationship with us. The first demonstration of free will opposite to God, was when Lucifer (the Devil) turned away from God and took a third of Heaven’s angels with him. God gave the angels a choice and did not punish those that followed the Devil. If He had, the remaining angels would have feared Him and felt forced to love Him, so that they would not be punished as well.

What kind of love would that have been? It’s safe to say we only want a relationship with others who feel the same way about us, right? And when that love is mutual, it is perfect and unshakeable. It is beautiful and everlasting. And so, God leaves the destiny of that relationship in our hands, as He patiently waits for us to freely make our way to Him.

It does not matter if you are of Christian faith, another faith, or any faith at all. That freedom comes from above, as we were all given the free will to choose.

Currently in China, impoverished citizens are being forced to chose between collecting government assistance and expressing their faith. The article from Christian Headlines highlights that the Communist Party is requiring those citizens to remove religious symbols from their homes and replace them with displays of the country’s former and current President. Could you imagine that in America?

Religious hostility, specifically to the Christian community, is not a new concept in the United States, however, the Coronavirus pandemic has brought it to new heights.

Churches all over the country are doing everything short of sin to keep their doors open and their message alive.

Regardless if you are a Christian or a non-believer, it would behoove all American’s who are not in favor of a totalitarian government to support the efforts of the leaders and agencies who work to preserve our religious freedom.

Why is that you ask? Because once you lose your religious freedom, you lose all your freedoms.

A totalitarian government cannot have citizens who have allegiance to something higher than the government. The government will impose whatever their dominant ideology is, and once that happens, it’s an open door to restrain our other freedoms as well.

Observing the events “that would never happen in America” occur daily, I admit to often feeling anxious and depressed. During these times, I remember that the same Spirit that raised Jesus from the dead, is the same Spirit within me. I find comfort knowing that there isn’t anything that can prevent the love of God from living within my heart. No one can take that away from me, ever.

As 2 Corinthians 3:17 says,  “Now the Lord is the Spirit, and where the Spirit of the Lord is, there is Freedom.”

Perhaps that is my favorite freedom. The freedom of sin and death, given to me by my Savior.

There was a time when I lacked the confidence to publicly proclaim that. Part of me didn’t want to make anyone uncomfortable, because I’ve realized, Christianity is on the list of topics people keep to themselves. This was before I understood God’s Word and felt a personal relationship with Him.

This was also before I turned on the TV and saw protesters in Portland burning Bibles, severed pig heads, and the American flag. I am no longer concerned whether or not I offend someone. I am more concerned that is not OK for Christian churches to gather to read the Bible, but it is OK for Bibles to be burned in riots and protests.

Free will is freedom to choose courage in proclaiming the grace of God, regardless if it gets the popular vote.

The only vote I’m concerned with getting is that of God’s. I’m confident I’m traveling down the right path, and I hope you join my personal, patriotic, and prayer-filled journey.